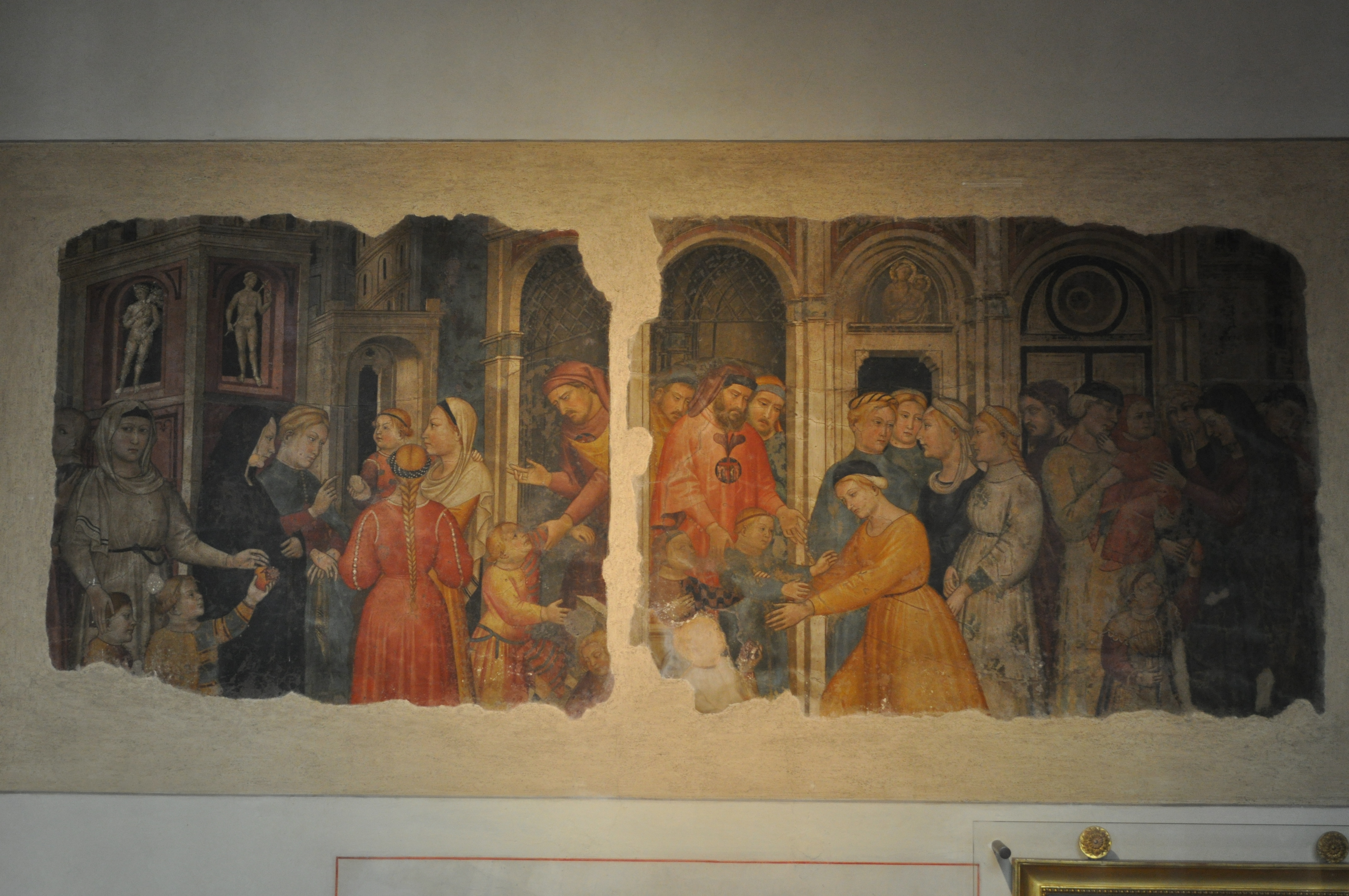 The Abandonment and Restitution of Children

The Misericordia operated a kind of Foster Care unit inside its walls, and supported destitute families by tending to infants born into unstable environments. The hope was that these children would ultimately be reunited with their parents once affairs could be righted in the home, and sometimes this actually occurred. Often times it did not.

The fresco on the building’s façade presents a moralizing image about the circumstances parents might find themselves in when seeking the Misericordia’s services and the custodial care offered by confraternity members. Led by a woman in white, a number of children appear in the lower left, holding opened pomegranates and moving toward the composition’s center. A black-clad woman, an ominous reference to the sorrowful situation unfolding before her, points her finger into a circle formed by three others, one of whom holds a child in her arms. Another woman turns her back to us, revealing only the braided and unveiled hair than stretches down her back; perhaps signifying her as an unmarried and youthful woman. Her facelessness may be the artists’ way of providing anonymity to a sinful woman who now faces the consequences of her sexual transgressions, a way of acknowledging the presence of unwed mothers in Florentine society without actually identifying any one of them in particular.

The Misericordia’s loggia features prominently at the painting’s core as both the primary setting and, to a degree, the actual hero of this story. The child entering the facility from the left does so only under duress, and resists the confraternity member who forcibly grabs his arm to yank him inside. The frown on the man’s face reveals and accentuates the real-life dramas that transpire at the Misericordia on a regular basis, as well as the emotional toll endured by all parties during these familial severances. This dramatic anecdote is framed by the loggia of the residence hall, which seems to act as a participant in the action that unfolds within its arches.

Fortunately, the right side of the fresco tells a happier story. Now a trio of men – one of whom literally pushes a child out of the loggia – oversees the restitution of children with their elated parents. Women congregate before the doorway to the residence hall, which has been identified by Arnoldi’s half-length sculpture, installed in 1361, of the Madonna holding her own child (find the Madonna and Child). Whereas the left side features only women in the act of abandonment, the right side includes men, as well: we might wish to see them as fathers, but there is no way to confirm such an identification (they could be grandfathers, uncles, friends, or merely bystanders who witness this reunification). To the far left stands a woman in blue who acts as the counterweight to the one in black on the left side: she seems to serve as an allegory of the joy of familial reconciliation, as opposed to her scolding counterpart’s representation of the pains associated with abandonment.

The fresco’s placement on the building’s façade – just above the setting that Gerini and Ambrogio di Baldese represented in this image, in fact – made it immediately visible to all passersby who walked along or stood at the south edge of the Baptistery of S. Giovanni. Chief among these viewers would have been the parents and family members of infants who witnessed the portion of the baptismal ceremony that was performed in front of S. Giovanni’s south portal. As such, the image probably had an immediate impact on new parents and their families: the Misericordia, it seemed to say, could help them in times of need, but that there would be emotional strains involved should they choose to render their children to the confraternity’s care. It was, at one and the same time, both a somber warning and a gesture of great charity.

Niccolò di Pietro Gerini and Ambrogio di Baldese used the architectural structure of the Misericordia as a character in this fictitious narrative, but they also employed other features of the urban environment as markers for viewers of the fresco who stood below it in the middle of the square. The viewer has been intentionally positioned to see this fresco with her or his back to the baptistery, which of course explains why that octagonal form does not appear in the painting. To the far left appears the façade of the new cathedral, finally walled up in 1381 and ready to be capped with a dome that had not yet been designed. The square building next to it seems to represent the city’s bell tower, articulated in pink with standing sculptures placed on top of it to recall the statues on the Campanile. A cluster of structures follows, perhaps representing the Palazzo del Podestà, the square granary of Orsanmichele (complete with niches containing sculptures, which would have been an accurate sight in 1386), the crenelated residence of the Wool Guild, and a spiral column in front of it that may allude to the base of a pedestal that was positioned at the mouth of the Old Market. To the right of the loggia appears a regal palazzo, complete with two towers, that may mark it as the old Bishop’s palace. Alternatively, this pink structure might echo the form of S. Maria Maggiore, the church located to the west of the loggia.

The artists have elongated this urban landscape and altered its features in an effort to plot out a pathway for viewers that they would understand. The city has been depicted not as a rational space, with vistas and dimensions and distances carefully mapped out, but rather as a series of independent landmarks easily identified by specific features that have no real relationship to the structures beside them. As Sonia Brozak notes, this conforms to the common approach that Trecento writers took when describing spaces in written texts. Dante and Boccaccio tended to take for granted their readers’ familiarity with urban environments and, when describing the settings of their tales, preferred to focus on specific landmarks in real places rather than review the vast cityscape in which those landmarks were located.

The two painters worked together on a number of projects, but Gerini in particular became a favorite of Florentine patrons at the turn of the fifteenth century. His works adorned altars and interior spaces of the Confraternity of the Pilgrims in S. Maria Novella, the sacristy in the Franciscan church of S. Croce, the guild church of Orsanmichele, and the Camaldolese monastery of S. Maria degli Angeli. He also worked in the towns surrounding Florence in rural Tuscany, a testament to the extent of his reputation. Largely overlooked by historians of early Renaissance art, Gerini’s popularity speaks to the public taste for Giottesque imagery just before the arrival in Florence of the transformative New Style of painting articulated in full by the artist named Masaccio (d. ca. 1427).

“July 5, 1386: To the painters Niccolò di Pietro Gerini and Ambrogio di Baldese a payment of 17 gold florins for the completion of work on the picture for the façade on the house of the Misericordia, 17 gold florins.”