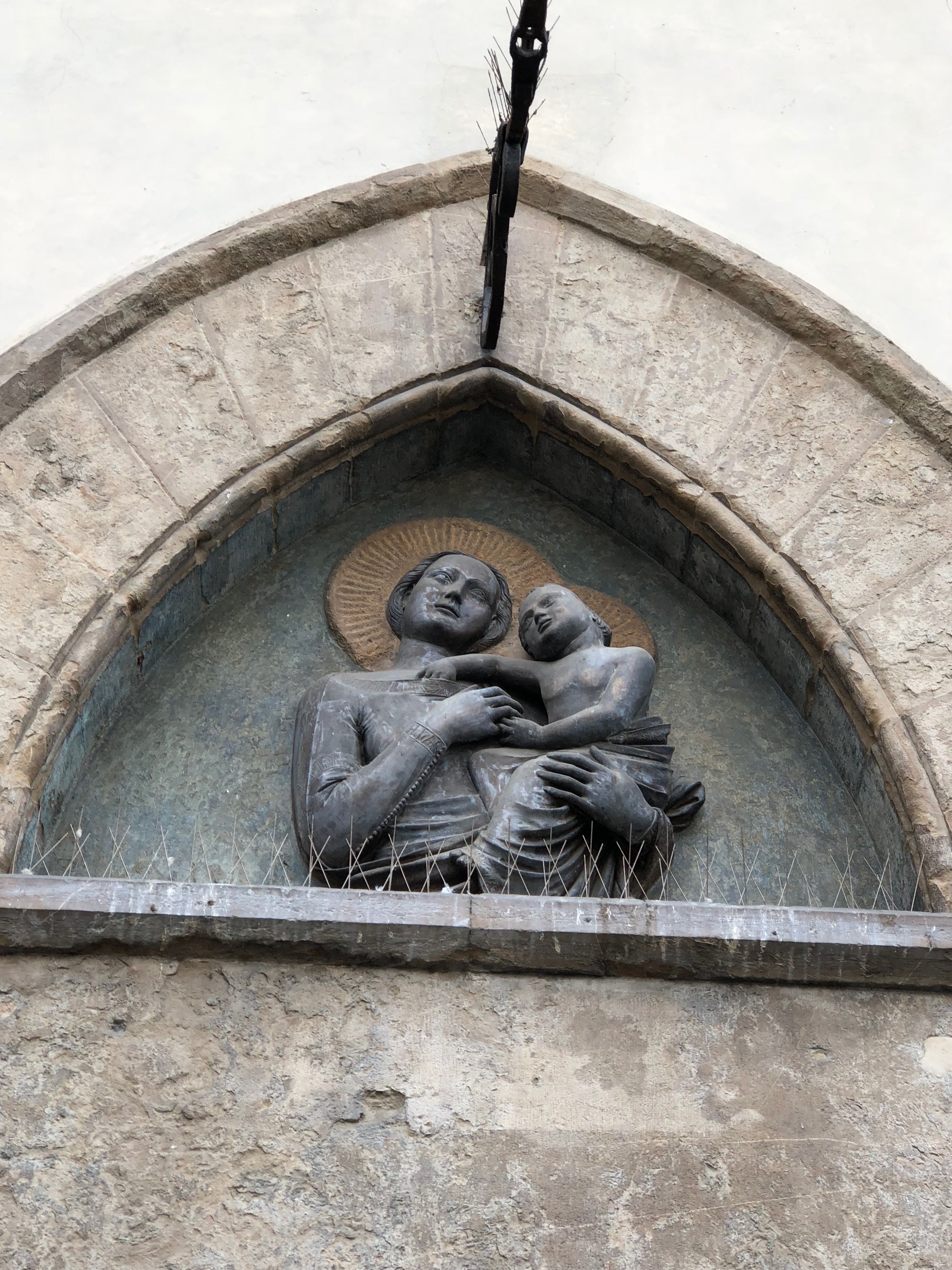 Arnoldi’s Madonna and Child conforms to the half-length form popular at the time. The Virgin’s swung hip supports the Christ child in her left arm, while her right hand clutches both her own breast and the boy’s fingers. The two figures incline their heads toward one another while their halos intersect and overlap. A series of parallel forms – Mary’s right forearm and Christ’s legs, Jesus’s back and the Madonna’s right bicep, Mary’s left hand and her son’s tilted head – leads our eye in a gothic zigzag across the surface that culminates at the composition’s apex where the two heads nearly touch. The glazed background and pointed arch suggest that these figures reside in a celestial zone both above and within the Piazza S. Giovanni: they occupy the heavenly realm in perpetuity but simultaneously preside over the citizens of Florence while protecting the institution of the Misericordia (including both its members and those who take advantage of its services) at all times.

Installed above the heads of visitors to the residence hall and positioned in the doorway that led directly to the oratory where Arnoldi’s figures on the Misericordia’s altarpiece stood, the Madonna and Child prepared lay Florentines for the experience they were about to have inside the place where mothers and their children were either separated from each other or reunited after a period of estrangement. The appearance of the Holy Family at this important, limnal juncture between the public space of the city (in the form of the piazza) and the private space of the Misericordia surely offered to viewers of all genders, ages, and vocations a sense of the services rendered by the company as well as the quality of care its members promised to provide for the children offered to it by families in need. As such, the intimacy between Arnoldi’s figures seems both tender and anguished, for some of those who entered into the residence hall from this portal could not have been happy about the transaction that was about to occur.

Images of Mary were predictably popular in domestic settings, where women of all ages and stations recognized her as a symbol of matronly love. Her placement above the front entrance of the city’s best-known Foster Care center must have made her particularly appealing to those Tuscan women who, when approaching the confraternity in their time of need, may have been reminded that the Virgin had given birth out of wedlock and probably well before her twentieth birthday. She was a sympathetic and completely appropriate patron for the confraternity of the Misericordia.

“1361, Action 14, 25 June. They deliberated and decided to send the company’s administator (burser) to pay the debt of 16 gold florins to the master Alberto Arnoldi as final payment for the figure and marble image of Our Lady holding at her breast her blessing son, which was positioned over the portal of the oratory.”