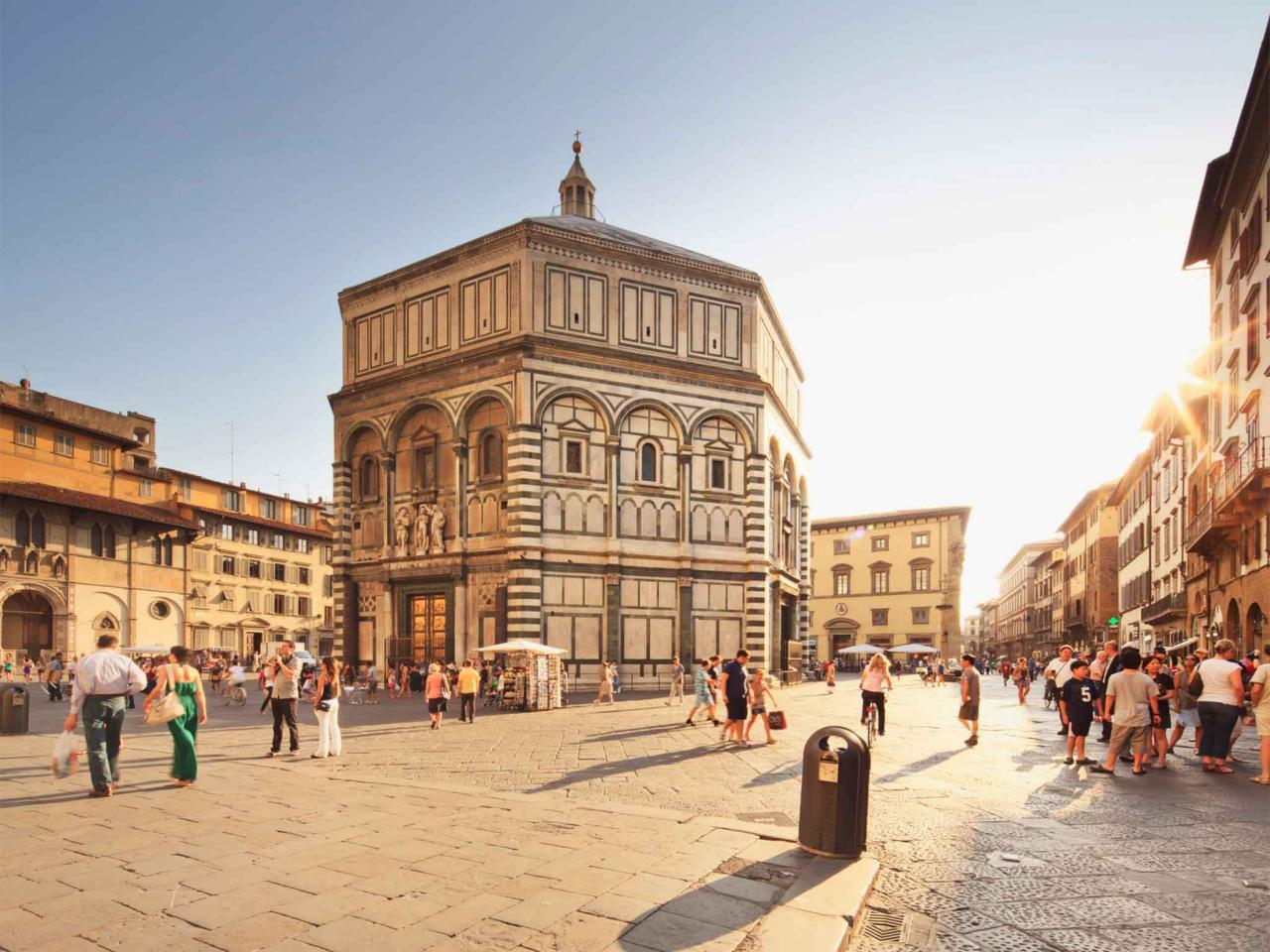 What a day we had.

Got to the Baptistery right at 8:15, but there was no guard at the digital turnstile – just one inside the building checking bags and patting people down for security reasons. The place was totally packed, so we had to get in line and inch our way forward. But finally we got up to the doorway and just hopped the turnstile (much to the horror of everyone behind us), showed the guard our letter of permit, and smiled as he waved us in. We set up our first scan around 8:30 am in an inconspicuous corner of the building due to the crush of people in the middle (where we initially wanted to start), but we bungled it completely – forgot to set it for High Definition – and had to do it over.

But luck was on our side, for just as we realized our mistake a worker inside the Baptistery flipped a wrong switch in the building and the lights went out entirely for about ten minutes – almost total blackness. This, in turn, caused the guards to close the doors to the church and shoo out most of the visitors for safety concerns. Seeing our chance, Catalena Bent (my incredible assistant and, oh yes, daughter) made the executive decision to start over again by setting up the tripod in the exact middle of the baptistery, which was now void of humans. As soon as the lights went back on, we cranked up the scanner and were able to get a really good read without too much human interference.

We then proceeded for four full hours, scanning walls and statues, getting in behind the high altar, and capturing three different baptismal fonts. At one point, we had to stop in order to accommodate a half-hour mass, performed by one of the world’s oldest priests, which we attended with solemnity and impatience. It ended after about 20 minutes and we got back to business.

In the end, our work was truncated due to the presence of scaffolding that covered the lower portion of three of the eight walls inside the church. I’d been told this might be an issue, but decided we had no choice but to move forward. Still, we felt good about what we got, and realized that the other three walls can be scanned over the summer by FLAW students.

Tomorrow we’ll return and go upstairs so that we can get the tops of the objects that were out of sight today. We might also scan the stairways that lead up to the top of the structure, which would give us a true 3D model of the entire building. I think we can do that between 8:15 am and 1:00 pm tomorrow.

We packed up all our stuff by about 12:45 and walked home, tired but happy. We fixed up some lunch while beginning the process of the download/upload, and got the program running as we ate. By 2:00 pm most of that stuff was done, so Cat went to bed for a nap. I washed dishes and then commenced the long part of the program – called “publishing” the scan – which took about 10 hours in Lexington the other day. Then I went to bed at 2:30 and took a 90 minute nap, which was wonderful.

When I awoke and finally dragged my butt out of bed at 4:30, I discovered that the entire program of 10 scans had completely uploaded and published! A new speed record!

The finished product looks awesome, if I may say so myself. We’ll add to it tomorrow to make it even better.

I also received an email from a Florentine bureaucrat who will try to get us into the Bigallo next week. So bonus points for that.

All told, this has been a solid A day: it would’ve been an A+ had there been no scaffolding in the Baptistery, but that was out of our control.

Tomorrow may be even better.