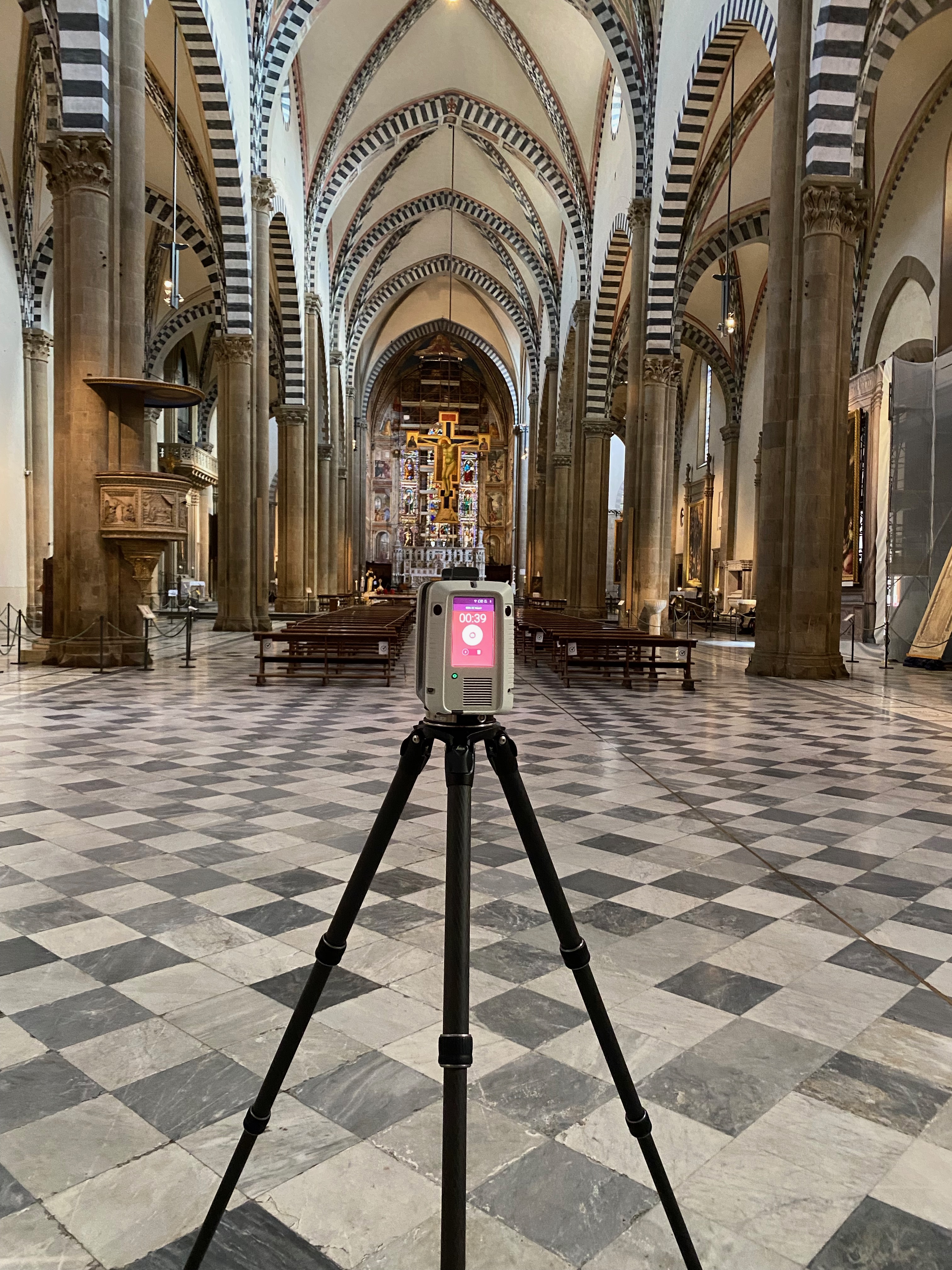 We're excited to welcome Professor Bent back to Lexington, and can't wait to share all the data he brought back with you all! While we work on the essays, models, and more, here are some thoughts from Professor Bent about his trip.

The Dominican basilica and cloisters of S. Maria Novella as we know it today were founded on the eleventh-century foundations of another church called S. Maria delle Vigne (St. Mary of the Vines, a reference to the fields that surrounded that part of Florence until the 19th century). With the permission of the Comune, the opera of S. Maria Novella, and the friars in the community – and with the personal assistance of church architect Francesco Scamberulli and FLAW ally Giovanni Pescarmona – I had the privilege of scanning nearly every section of the surviving architectural spaces between June 6 and June 22, 2021, including the crypt, nave, transept, cemetery, and rafters of the church, as well as the Green Cloisters, Cloisters of the Dead, Spanish Chapel, and bell tower to the west, and most of the complex’s exterior (including sections of the church’s rooftop).

Most of the work was completed in the comfort of the famously inspiring interiors of the complex. The structure we see today was initiated by the mendicant followers of St. Dominic in 1279 but grew only in sections over the ensuing decades. The present-day transept appears to have been completed by 1315, but the nave only extended one vault beyond it to the south. Friars lived in the cloisters appended to the basilica to the west. Additional vaults were added gradually during the fourteenth century, and by 1400 the church and the cloisters we know today were essentially complete.

The Nave and Transept

As is true of literally every Florentine church from this period, S. Maria Novella’s nave is a palimpsest of images and objects. A series of baroque paintings adorn the altars that line each side of the space, but behind them have been discovered frescoes from the fourteenth and fifteenth centuries that the church displays on weekends: the later pictures have been installed on large hinges so that they swing out away from the walls, revealing behind them the earlier images. The Opera kindly arranged to open those paintings so I could scan the nave walls twice, once with the frescoes revealed and again with their later images in place.

A simple request to unlock the door to the stairs of the pulpit resulted in a quick trip up into the podium where friars preached to lay congregants in the nave: I would be surprised if anyone but members of the medicant community and the staff of S. Maria Novella have ventured up into that area before, so the view of the nave from the pulpit afforded by this model is truly remarkable.

The transept and high altar were captured with success, although the scaffolding in both the Cappella Maggiore and the Rucellai Chapel on the east end prevented a clean scan. The Strozzi Chapel, built in the 1340s and decorated by Andrea and Nardo di Cione in 1350s were cordoned off to prevent public access (the first time I’ve seen that there in the thirty-five years I’ve visited the church), so I was able to take my time there.

The basilica is normally filled with tourists, particularly during the early summer weeks when the growing swell of foreigners becomes a genuine torrent. But in 2021 only a few brave souls ventured into the city, and the foot traffic inside S. Maria Novella was considerably lighter than normal. Periodically a curious visitor might ask about the scanner, but largely my time in the nave was uneventful.