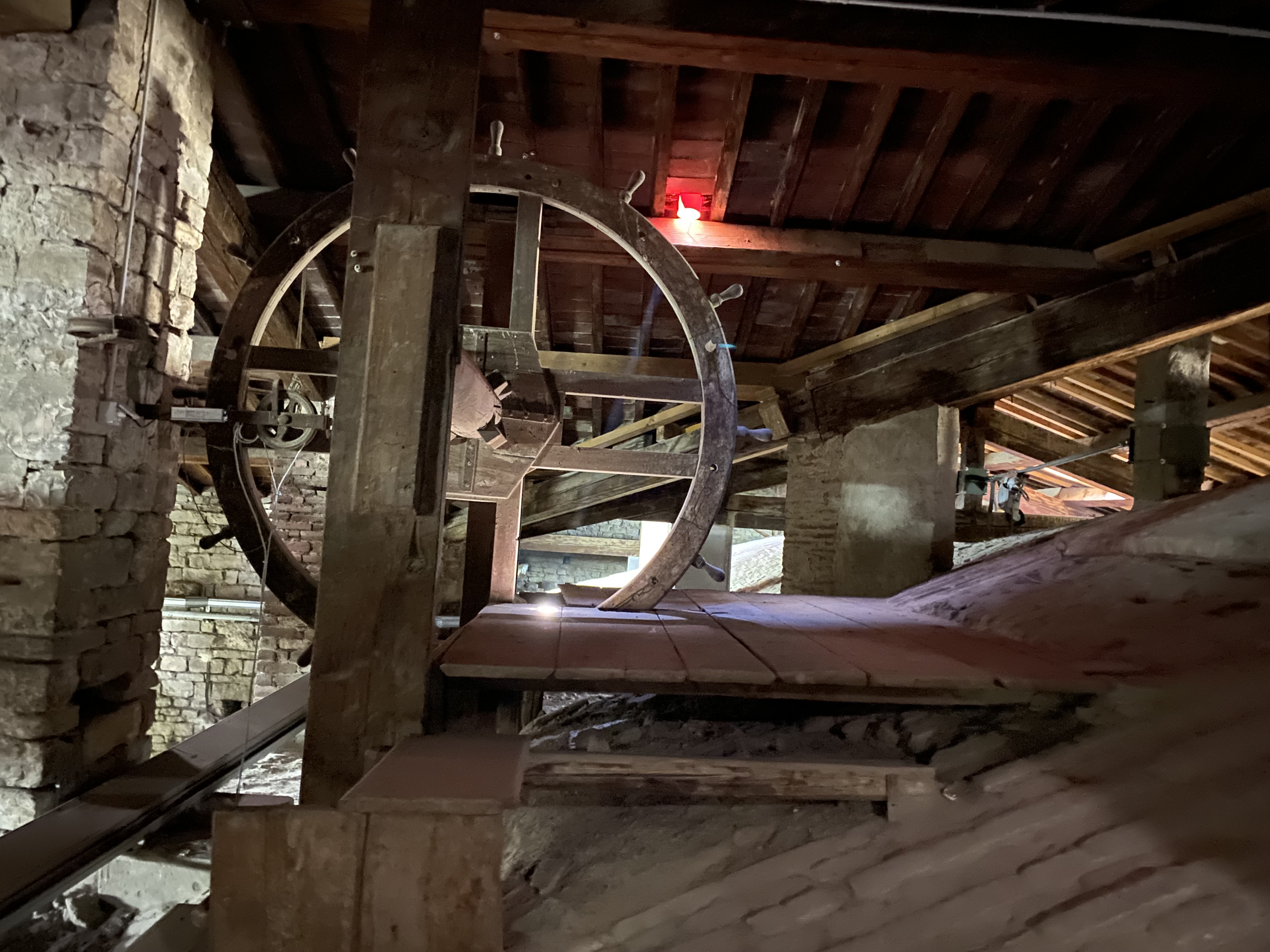 Welcome back for another installment of Prof. Bent's Thoughts on Florence!

As I mounted the stairs of the pulpit, Francesco Sgambelluri introduced himself to me as the church architect. Unassuming in appearance and demeanor, but blessed with an encyclopedic understanding of the basilica and all of its spaces, the church architect quickly became my most important guide through S. Maria Novella. He invited me, first, to venture to the roof of the west side aisle, and then to explore the vaulting system in the rafters of the church that few of us have seen. This journey introduced me to the lower sections of the bell tower that lead to the vault over the Sacristy (we’ll get to that in a minute), which in turn permits one to venture onto the ceramic tiles of the roof along the west edge of the nave. Thus began my adventure in the furnace that was the attic of S. Maria Novella.

The steep and smooth vaults of the church’s nave and transept support nothing above them, as the wooden beams forming the A frame above them are attached only to the side walls beneath them. Climbing to their summits took its toll on this old man, as the lack of toe holds combined with the weight of the 25-pound scanner in 95-degree heat left me parched, soaked in sweat, and wobbly on my feet. The debris of centuries of cement, plaster, and broken brick litters the floor around those vaults, punctuated occasionally by a dead critter that found its way in, but couldn’t find its way out again.

As I scanned, I came upon three unexpected features. The first was a large wheel situated in the vault directly above the high altar. This, Francesco informed me, was a pulley that, when properly affixed with ropes that descended through holes poked in the ceiling, permitted the friars to elevate and drop in the church candelabra that would symbolize divine light during services. The second oddity were the holes in the ceiling themselves, which often provided excellent vantage points from which to see bits and pieces of the church from above. The view of Andrea di Cione’s Strozzi Altarpiece from above remains among the most vivid and memorable moments of the project. The third surprise appeared in the rafters above the sacristy, where the structure of the entrance wall of the eleventh-century church of S. Maria delle Vigne rises up, embedded in the wall of the fourteenth-century church of S. Maria Novella that was built all around it.

Giovanni Pescarmona, intrepid and brilliant fellow-pioneer in Digital Humanities, accompanied me as we ventured into the nave. Again, with temperatures soaring, the two of us managed to scan the length of the church with a surprising amount of efficiency, but again paying the price of exhaustion as we labored. Visitors who navigate through these spaces in our model will not experience the heat, the dirt, and the exhilaration that filled our lungs that day. You’ll just have to imagine it when you see it.

As exciting and exhausting as the rafters were, the work in the bell tower (or Campanile) offered a more dramatic experience. The tower’s base connects to the eleventh-century church in the foundations of the current structure, so the fairly random stonework that we see there differs from that of the later fourteenth-century one that was added on top of it. Narrow steps hug its contours, and as the tower rises those steps are closed in by equally narrow openings between floors. Among the more difficult tasks of this entire project was negotiating my way through these tight spaces without dropping the scanner or bashing it against the stone walls as I stumbled up and down the uneven steps of those stairs. The weather also cooperated, for the most part: A short but intense rainstorm interrupted my work briefly – you don’t want water on your laser, after all – but it passed quickly and I was able to complete my work there without much difficulty.

The vistas from the tower are unsurprisingly impressive, affording one clear views of every major structure in Florence. I gazed upon the dome of the Medici chapels at S. Lorenzo, a full view of the Duomo, and the distant façade of S. Miniato al Monte on the south side of the river. That was nice. But I was more concerned with the expanses of the church’s roof that I could see from each level of the Campanile, as capturing the tops of buildings is easily the most difficult part of any serious scanning project. Fortunately, the arches on all four sides of every one of the tower’s levels provided fairly clear access points to the west side of the church roof, much of the crossing, and a vast section of the cloisters. The final push to the tower’s uppermost level brought me to the church bells, a collection of large and loud bronze objects that now ring out thanks to an automated mechanical timing device. I glanced at my watch as I scanned that area and was relieved to see that it was 1:37 pm: too late for Mass, too early for vespers, and exactly 23 minutes from the top of the hour. I absolutely did not want to be up there when those enormous sound machines suddenly swung into action, and I was able to get my scanning done well before the bells of S. Maria Novella tolled out the time.