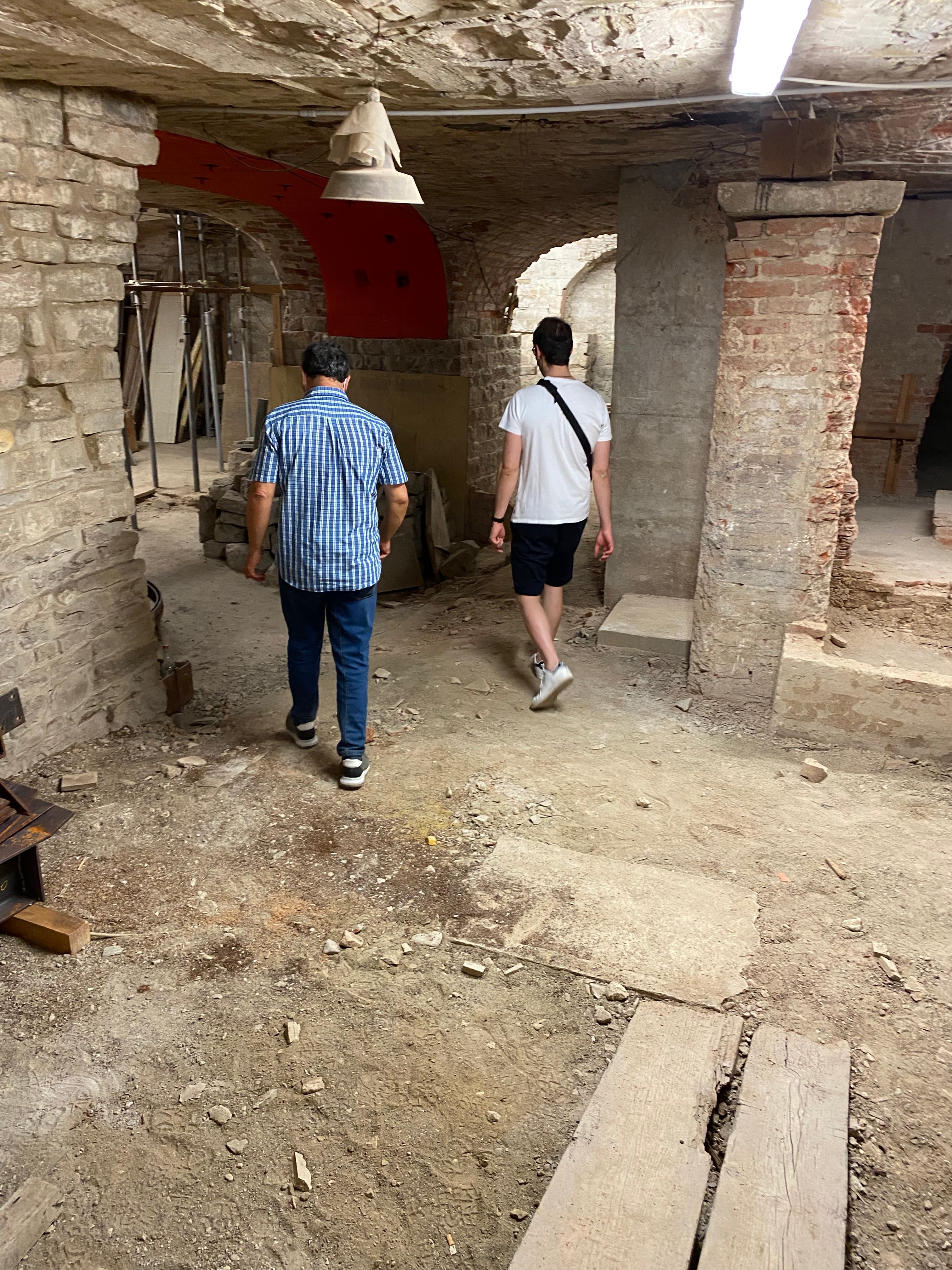 The two of us entered the scaffolding at the entrance to the work site that faces the station. As we scaled the first of a dozen ladders, each one leading to the next level up, it quickly became clear that the great combined girth of the scanner and its unusually wide carrier – that would be me – would make it nearly impossible to squeeze all the way up to the top. Francesco solved the problem immediately by scampering nearly all the way up to the top of the scaffold and then lowering down a mechanically operated rope with a hook on it. To it we attached the backpack containing the scanner, batteries, and iPad and then we watched it rise rather quickly up the side of the church. My heart essentially stopped for the duration of that journey, but Francesco’s solution proved to be perfectly safe and utterly uneventful. I climbed up the ladders behind the scanner and reached the church’s summit within a couple of minutes.

Surrounded as it was with scaffolding, the edges of the rooftop at the church crossing were completely barricaded: we could walk along the tiles into the very center of the transept with absolutely no fear of rolling off the edge to our untimely deaths. And we took advantage of that by setting up the scanner in positions that allowed us to capture all four sections of the crossing, although perhaps not with the same amount of accuracy as one might like. Importantly, we were able to scan the north and east sides of the Campanile from close range, another rarity in this project.

I spent hours on the scaffolding outside the church’s Cappella Maggiore, but the work progressed deliberately. The strong WiFi signals embedded in Florentine scaffolding interfered with the connection between the scanner and the iPad, making it impossible to connect one scan to another and leaving me to feel my way through the space. Moreover, my time was limited to only a few hours there, and by 13.00 I had to finish my work after scanning only a small segment of the exterior wall. I trudged home in the intense heat and spent about an hour connecting scans together to form the model we’ll upload and edit in Lexington. What I got was, I think, unusually good, but I will have to return to the church again at a later date to get the rest of the wall that is currently hidden by the scaffolding there.

It became increasingly clear to me during this project that Francesco Sgambelluri was deeply interested in having us scan the extant church of S. Maria Novella and model from its foundations the eleventh-century structure that predated it. This desire was revealed when he invited us to enter into the crypt below the sacristy that served as the burial chamber of prominent Florentines as early as 1094. Used today as a storage space, the dimly lit crypt contains a number of small doorless rooms that once held tombs, but are now filled with dust, rubble, and the occasional bone or two (not kidding). An abbreviated staircase underneath the nave leads to a former hole in the ceiling from which, Francesco told us, corpses were passed upon the completion of funerals so that the deceased could be lowered quickly into the crypt without having to carry them through and around the church of S. Maria delle Vigne to get them to their tombs. A portion of the Campanile’s eleventh-century foundation can be found at the northwest corner, and under the archway today are the small rectangular metal boxes that still hold the remains of those Florentines interred in the crypt nearly one thousand years ago.

Of the eleven structures we have scanned, the complex at S. Maria Novella will probably wind up being the most complete – even though we did not have access to the west cloister, the pilgrims’ dormitory, or sections of the church blocked by scaffolding (the frescoes by Domenico Ghirlandaio, the opening of the Rucellai Chapel, and the exterior of the north wall could not be scanned properly during this trip). This is due largely to the generosity, curiosity, and collaborative spirit of the different directors of the area, and I wish to thank personally Sonia Colucci, Sara Velenza, and Gaia Ravelli for their advocacy and assistance as this project unfolded during the pandemic spring of 2021. But it was the active guidance and suggestive brilliance of Francesco Sgambelluri that will make the model of S. Maria Novella the most comprehensive one of this entire project.

Check back next week for Prof. Bent's thoughts on San Lorenzo, as well as an update from our students on campus!