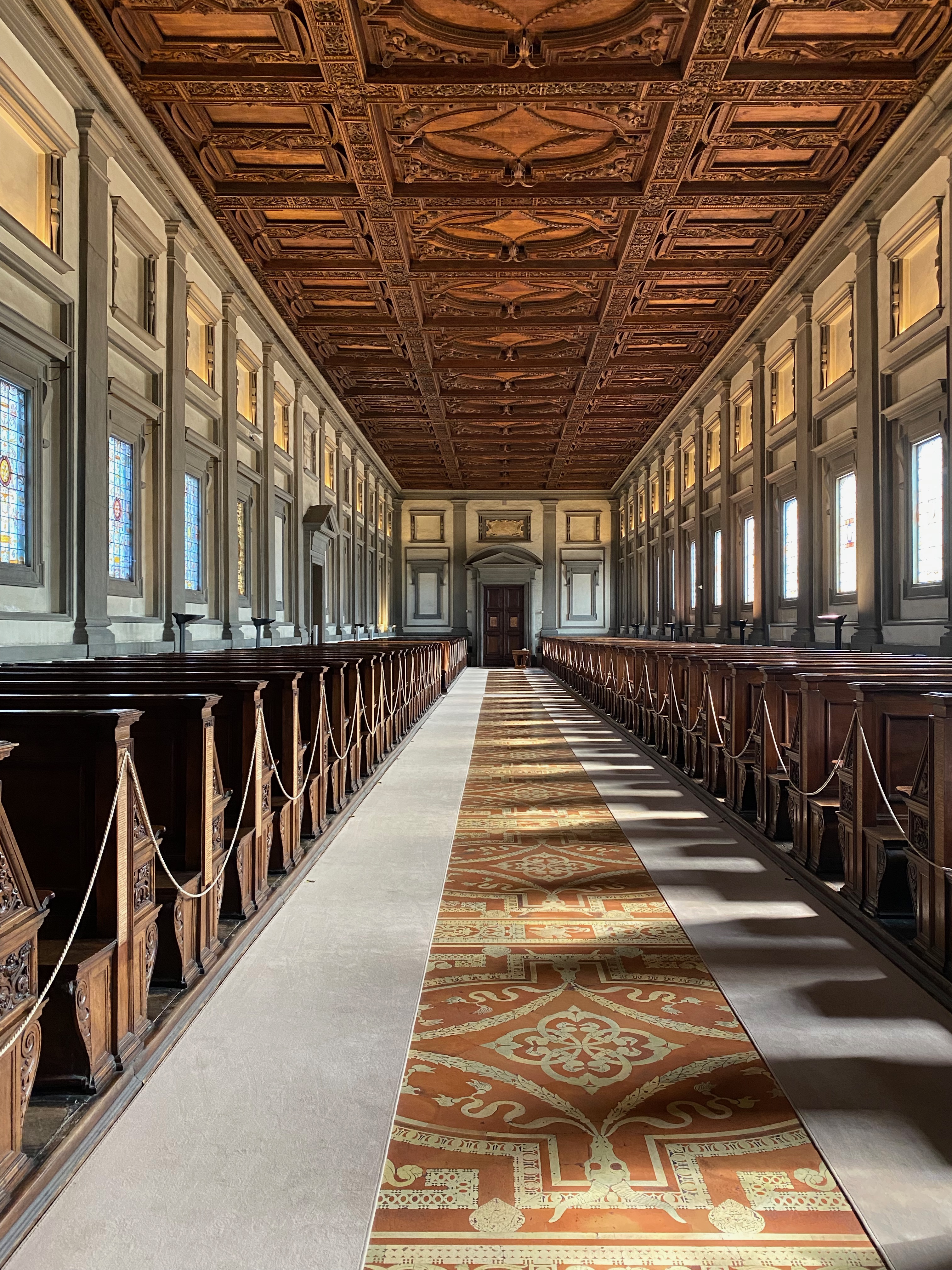 Professor Bent's work in Florence continues with the scanning of S. Lorenzo.

The church, cloister, and library of S. Lorenzo has enjoyed elevated status in Florence since its early Christian foundations. Thought to have been the city’s cathedral during the early Middle Ages, the site transformed into a neighborhood parish church that, by the end of the fourteenth-century, counted among its worshippers members of the rising Medici family. One of them, Giovanni di Bicci – father of Cosimo de’Medici and great-grandfather of Lorenzo the Magnificent – constructed a burial space in the church sacristy during the decades of the 1420s that features in its center a tomb containing the earthly remains of the patron and his wife, Contessina de’Bardi. Succumbing to considerable lobbying from the priests and canons of the church, Cosimo and his brother, Lorenzo de’Medici, later agreed to fund the construction of the renovated church and cloisters that now stands on the spot once occupied by the early Medieval structure. Both were buried there, as was Cosimo’s son, Piero de’Medici, thus cementing its place as a Medicean stronghold for hundreds of years. Pope Leo X de’Medici’s commission of tomb sculptures and the architectural designs of the Laurentian Library from Michelangelo in the 15teens confirmed the association between the church and the family.

Thanks to the diplomatic intervention of Clara Marinelli at the Friuli Gallery, I had the good fortune of meeting with the priest, architect, and library director at S. Lorenzo to discuss the possibility of scanning the entire complex in the spring of 2020. Our plans to work in the structure during the month of April were scuttled by the outbreak of COVID-19 and the rapid spread of what turned out to be a highly contagious and unusually dangerous disease, and which resulted in the lockdown of Florence (and of all of Italy) that spring. Fourteen months behind schedule, we were able to recommence the project only on June 16, 2021, and only then in the Biblioteca Laurenziana (Michelangelo’s sixteenth-century structure that technically falls outside the chronological parameters of our project. Still, when presented the opportunity to scan something by Michelangelo, there is only one correct response). Upon my arrival in Florence, all communiques with the Opera responsible for the basilica of S. Lorenzo had elicited nothing but silence. As far as I knew, I did not have permission to scan the church at all when I got there.

Giovanni Pescarmona, a Ph.D candidate in art history at the Università di Firenze and long-time colleague and ally, joined me for this two-day project. The longitudinally oriented reading room, complete with roughly forty rows of sixteenth-century reading benches, immediately raised problems for us. Because they are so tightly packed together, it’s nearly impossible to set up a scanner to capture the entire space above and below those benches without completely flooding the dataset with information. We did our best by alternating scans row by row and zig-zagging our way from one end of the rectangular room to the other, and we made sure to include three High Density scans from a slightly elevated position to capture areas from above; but even so, the flooring underneath those benches could not be scanned fully. The result is, to me, an unsatisfying product that probably needs more work in the future.

By contrast, the vestibule leading up to the reading room – also designed by Michelangelo in the 1520s – was a complete success. Giovanni and I made sure to cover every angle of that bonkers space with Medium Density scans, even though that might be too much data for such a condensed area. During this scanning session, I communicated to Giovanni one of the governing rules of laser scanning that I now pass on to you:

The irony, of course, is that I explained all of this to Giovanni as we were taking great pains to scan every inch of the fluid stairwell of the Laurentian vestibule, in which each individual stair is a masterpiece unto itself. We stuck the landings, but we also got the stairs leading up to them.