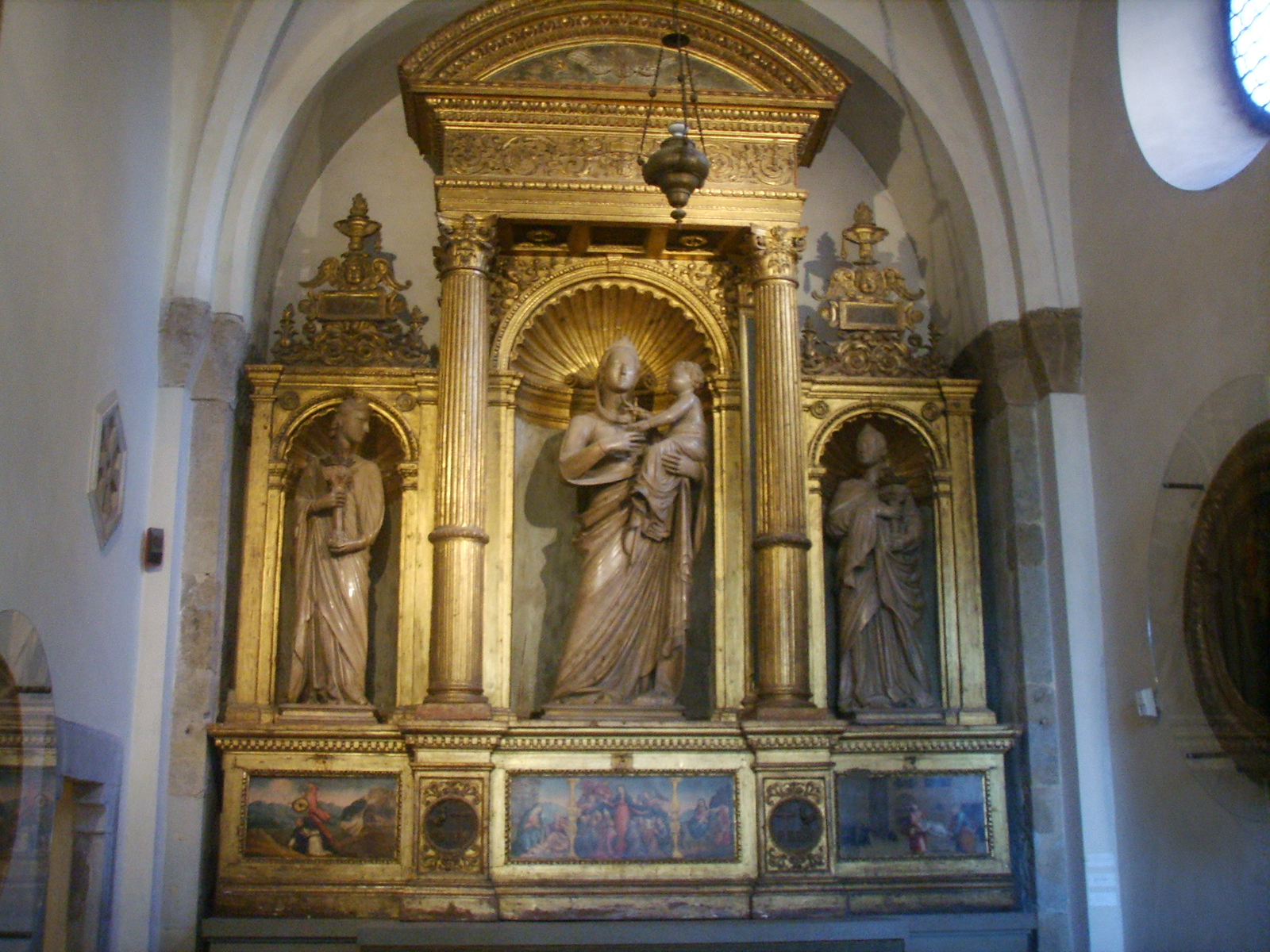 Madonna and Child with Angels

Representations and effigies of all shapes, sizes, and media could adorn the early modern altarpiece, a devotional object that was placed on top of the table where the sacraments of the Eucharist were venerated and consumed by priests. Usually the altarpiece took the form of a wooden painting that featured, up to about 1440 or so, separate panels dedicated to single figures or scenes. The central panel often, but not always, represented the Virgin and Child, while flanking panels celebrated an institution’s reverence for specific saints who might represent the patron of a religious order, parish, feast day, or individual benefactor. Above and below these large forms often appeared smaller pictures dedicated to narrative scenes, often representing moments from the life or lives of those saints occupying the larger panels above.

Arnoldi’s ensemble is that rare structure that both embraces and defies tradition. The three-dimensional forms have been arranged in a way that recalls the format of a painted altarpiece, with the central characters of Christ and the Madonna appropriately elevated above those who flank them. But Arnoldi, abiding by the requirements of his contract, sculpted two angels instead of saints to flank the Virgin, a distinct departure from the appearance of most Trecento altarpieces. Moreover, Arnoldi did not carve any bas-relief narrative scenes below these large statues in a way the might mimic a strip of predella panels placed at the base of an altarpiece. (this would be remedied only in the sixteenth century by Ridolfo Ghirlandaio, who painted images of charitable scenes from the Bible that were added to Arnoldi’s altarpiece in 1515). As a result, the ensemble originally appeared as a group of standing figures perched on a platform above the altarpiece in a grouping not unlike the one devised by Giovanni Pisano for the Scrovegni Chapel in the distant city of Padua in 1305. This may explain why, in the records of deliberations concerning Arnoldi’s commission, the captains of the Misericordia mentioned the sculptors of Pisa as the qualitative bar by which the local artist’s works would be judged.

Arnoldi’s figures bear close resemblance to sculpted images produced in Florence during the first half of the fourteenth century. Despite being hidden by draperies that pull across her torso and sweep from left hip to right foot, Mary’s body seems proportionally accurate and naturalistically balanced thanks to a contrapposto pose formed by her flexed right knee and straight, weight-bearing left leg. The hefty Christ child, perched on his mother’s bent left arm, raises his right hand to her neck in a gesture of intimacy that contrasts with the more didactic presentation of the small crucifix that he holds in his left. The two angels hold candelabra that appear as columns and turn their heads (attenuated on top of rather slender and elongated necks) inward toward the holy couple. The chubby cheeks of Christ and the volumetric bodies of all four figures suggests the influence of Arnolfo di Cambio, whose marble figures on the façade of the nearby Duomo had been in place since the first decade of the century. But the craned necks and heads of the angels, combined with the swaying hips of the Virgin, recall the more Gothicized work of Giovanni and Andrea Pisano, the latter of whom was active in Florence during the decade of the 1330s.

In fact, these visual recollections of the work of earlier Pisan artists confused later critics of Italian sculpture. In his famous sixteenth-century study of Italian art and architecture (the famous Lives of the Artists), Giorgio Vasari erroneously attributed Arnoldi’s figures to Andrea Pisano and his assistant, Ciognara, perhaps due to their participation in the sculptural project to cast bronze reliefs on the south doors of the Baptistery that face the Misericordia’s residence from the middle of the piazza. His mistake is understandable due precisely to Arnoldi’s intentional employment of the Gothicized approach to sculpture that his patrons, the captains of the Misericordia, demanded from him.

“1359, Action 15, 18th day of June: Filippo di Bartolo Filippi, Rusticho Donati, Filippo del Nero, Davanzato Iohanni (Davanzati), Giovanni di Firenze, and Francesco di Pero captains of this confraternity, in their name and on behalf of their compatriots, deliberated on the following things: First, they agreed to offer to Alberto Arnoldi, master from the parish of San Michele Berteldi, the commission to produce an image in marble of Our Lady holding her Son in her arms in an act of mercy, decorated and adorned in gold and lustrous colors as is appropriate, with two angels: the Madonna should be at least three braccie tall (roughly 1.5 meters) and the two angels at least two and half braccie tall (roughly 1.25 meters). All of these figures must be by the hand of Alberto, who shall receive a salary of 150 florins for the figure of our Lady and 130 florins for the two angels, who should be holding candles in their hands: the figure of Mary should be of a higher quality than the figure of Our Lady in Pisa. Its quality will be judged by three or four masters deemed to be qualified by the city of Florence, which shall appoint them at the time. And if it is deemed to be inferior to the one in Pisa, the Bigallo will not be obligated to keep it. And the images of the marble angels must be of the same quality and beauty of the said figure of Mary. He will be paid in the following manner: he will recieve an initial payment of one hundred gold florins, and when the figure of Our Lady has been completed to our satisfaction he will have fifty gold florins, and when he has purchased the marble for the angels he will receive fifty gold florins to cover the cost of materials; he will compose and install in the oratory the figures at his own expense. And the figures will be completed in two years from the time of their initiation, as indicated by the date of the first payment of one hundred florins. See the statement notarized by Ser Tino (aforementioned book, carte 12). 1364, 16 August. They met and absolved the master Alberto Arnoldi and his son, Alesso, of wrongdoing in the production of the figures of Our Lady and angels, and they declared him to be in accord with the agreement made, and they asked me to check the contract and all the agreements, which I annulled and canceled (see carte 57).”