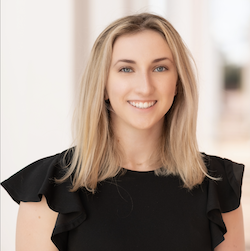 Julia Brinker ‘25 is a Cognitive and Behavioral Science major with an Art History minor. She’s from Towson, Maryland, and is involved with First Year Orientation Commitee and Reformed University Fellowship. She enjoys reading and crossword puzzles. JB 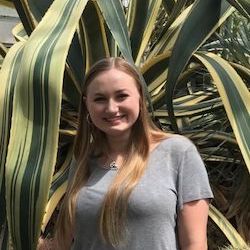 Georgie Gaines is a current junior from Lubbock, Texas. She is double majoring in English and Medieval and Renaissance Studies and minoring in Classics.

This is Georgie’s first year of working on the FLAW project. 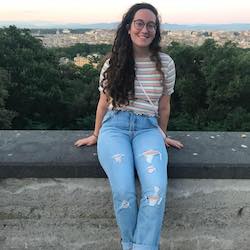 Elyssa McMaster ‘22 is computer science and art history double major from Roanoke, Virginia. On campus, she’s a member of the cheer squad and volunteers as a DJ at WLUR. Elyssa is an avid Philadelphia Eagles and New York Mets fan and enjoys kayaking and iced Americanos. 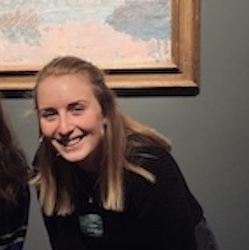 Ellie Penner, class of 2023, is an Art History major with a minor in Poverty and Human Capability Studies. She’s from Boulder, Colorado, and on campus Ellie competes on the mock trial team where she serves as the Vice President. Ellie enjoys hiking, swimming, doing crosswords, and reading. EP 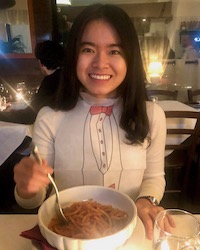 Haochen Tu, class of 2022, is a Business Administration and Computer Science double major with a minor in Medieval and Renaissance Studies. She’s from Suzhou, China. Haochen has been on the FLAW team since 2018. On campus she’s the Co-Chair of General Activities Board and Co-President of Club Badminton. Haochen also enjoys going on outing club trips, traveling, and watching movies. 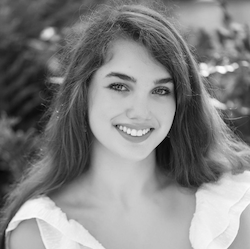 Kelsie Westmoreland, class of 2024, is a double major in Art History and Business Administration. Hailing from San Antonio, Texas, Kelsie enjoys cooking, ballet dance, reading, and spending time with her friends and family when she is not working on her school work. This is Kelsie’s first year working witht he Florence as it Was team. KW

Miles graduated in 2017 a Global Politics and English double major. Born and raised in Lexington, VA, he has spent a year in Florence, Italy, and an additional semester abroad in Rome, Italy, where he took courses in Italian and Art History. Miles is a member of Beta Theta Pi fraternity, played soccer for Washington and Lee for three years, and served as a Peer Counselor on campus.

Having lived in Florence, Miles assisted with the 2D Mapping aspect of the project, as well as working on several of the Italian sources, such as the Carocci Map. 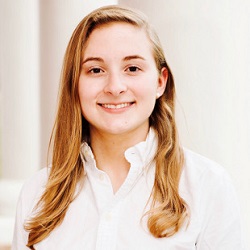 From New York, New York, Sonia graduated with a double major in Art History and Medieval & Renaissance Studies and a minor in German. She undertook two thesis projects, one of which deals with appropriationist art of the 1980s and the other looks at conceptions of spatial mapping in Early Modern Florence. She has spent time abroad in Münster, Germany; Florence, Italy; and Paris, France improving her German, Italian, and French. Sonia served as the Secretary of the Student Body at Washington and Lee and is a member of Pi Beta Phi sorority. In her spare time, she enjoys spending time with friends and reading The New Yorker.

Sonia helped to establish and refine the project’s initial goals, from the planned nature of the VR experience, to the educational benefits of the 2D mapping aspect. She contributed research pertaining to Florence that appeared in her senior thesis, worked on the 2D map alongside Miles and Dave Pfaff, and translated Paatz’s German notes on the Bigallo. 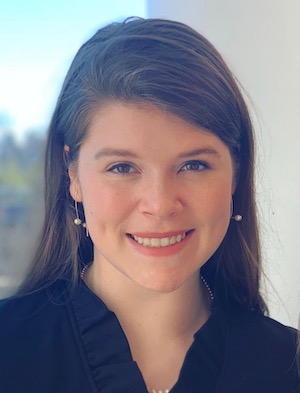 Alice is a member of the class of 2020 from Houston, Texas double majoring in English and Art History with a minor in Medieval and Renaissance Studies. She spent time in summer 2019 gathering data for the project in Florence alongside Professor Bent and fellow contributor Win. She is a member of the University Singers and has enjoyed studying abroad in England, Ireland, and the Netherlands while at W&L. 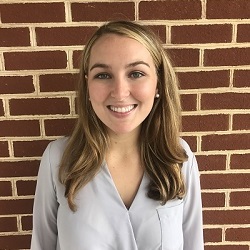 Katherine will graduate in 2019 with a double major in art history and German. She spent the summer of 2019 in Florence working on the project. She has presented Florence As It Was at the UNRH Conference in 2018 and at the Frick Collection in 2019. She has studied abroad in Siena, Italy, Berlin, and Göttingen, Germany. On campus, Katherine is a member of Kappa Alpha Theta sorority, the Outing Club, and ODK. During her free time Katherine enjoys travel, cooking, reading, yoga, and spending time outside with friends. 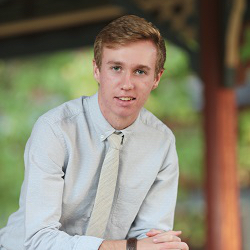 Hailing from the humid hamlet of rural Molino, FL, Colby Gilley is a current sophomore at Washington and Lee University. While he naturally gravitates towards humanities classes at W&L, he is enamored by all facets of the human experience. His potential major is still undeclared, but he has pronounced his investment in the University’s community, serving as a member of the FYOC, a University Big, and a leader on the Friday Underground team. Colby appreciates dusty old bookstores, the scent of wisteria on April evenings, and the sound of a reverberated guitar. 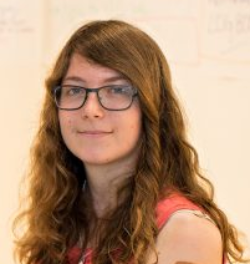 Mary Catherine hails from the icy Erie, Pennsylvania, and currently attends Washington and Lee University as a member of the class of 2019. She is pursuing a BA in Studio Art and Computer Science, with an independent focus on digital design. With these skills she hopes to produce 3D models for different varieties of interactive entertainment. She has spent time abroad in Florence, Italy, and is familiar with the city as a whole. Mary Catherine is a member of the Pi Beta Phi sorority, the Washington and Lee Students Arts League, as well as the Alpha Phi Omega service fraternity. 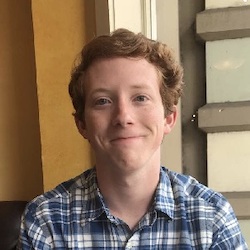 Win Gustin, class of 2020, is a European History major and Creative Writing minor. He’s from Mobile, Alabama and knows English and French. Win has studied abroad in Paris, and went to Florence to work on the Florence As It Was Project in the summer of 2019. Win is the Vice President of the French Speaking Organization and the Secretary of Mindbending, and he has acted in Dracula, 1984, and The Cherry Orchard at W&L. In his free time, Win enjoys writing short stories and novels, hiking, alternate history, and acting.

On the project, Win helps with site updating and maintenance, and he also works with integrating virtual reality technology into the Florence As It Was project. 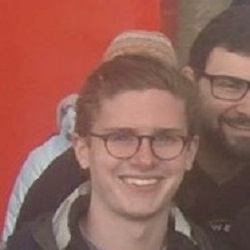 From Dallas, Texas, Sam Joseph is a junior at Washington and Lee University. Before attending Washington and Lee, he took a gap year and lived in Ho Chi Minh City, Vietnam, where he taught English, cooked for and worked with orphans and in hospitals. Majoring in Art History, minoring in Classics, and focusing on his independent Engineering and Physics studies, Sam plans to attend architecture graduate school. Through Florence As It Was, Sam conducted project research in Florence, Italy. For six weeks, he worked in the Kunsthistorisches Institut library and photolibrary. He translated Medieval Latin documents and took pictures for photogrammetric modeling. As a part of Dr. Uffelman’s Technical Examination of 17th-Century Dutch Paintings course, Sam studied abroad in the Netherlands. Consequently, he has pursued the subject of digital archaeology and conservation and its relation to the Florence As It Was project. Sam headed the project’s 3D modeling division.

Sam created the first models for Florence As It Was, including the flagship model of the Bigallo and the numerous niches of Orsanmichele. He also helped write the FLAW guidlines and methodology, translated scholarly sources from Medieval Latin, and shaped the project’s goal from the very outset. Finally, Sam assisted in training MC Greenleaf for the 3D modeling project division. 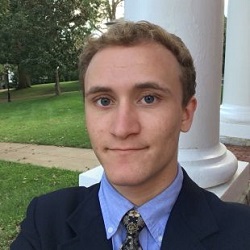 Aidan is a Medieval & Renaissance Studies and Art History double-major and Classics minor at Washington and Lee. He has studied Italian, French, and Latin and spent the summer working on Florence As It Was and practicing his Italian. On-campus, he spends much of his time working on Digital Humanities projects involving the University’s Special Collections archives, where he worked during the summer of 2016. In Fall semester 2017 he was appointed to the Digital Humanities committee. Outside the classroom, he enjoys participating in Catholic Campus Ministry, rehearsing with the University Singers, and seeing plays at the Blackfriars in Staunton with the Shakespeare Society.

Aidan works mainly on the website–design, organization, troubleshooting, and general maintenance. He also translates documents to and from Italian, and contributes essays such as the ones he wrote for the Bigallo. 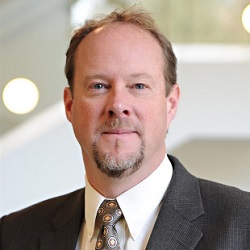 George R. Bent received his Bachelor of Arts Degree from Oberlin College in 1985 and his Ph.D in Art History from Stanford University in 1993. He came to Washington and Lee University in that year and has been a member of the faculty ever since. Bent teaches courses in Medieval and Renaissance art history, and specializes in fourteenth- and early fifteenth-century Italian art and culture. He co-founded Washington and Lee’s interdisciplinary program in Medieval and Renaissance Studies, chaired it from 2000 to 2003, served as Associate Dean of the College from 2003-2006, and chaired the Department of Art and Art History from 2001 to 2003 and 2008 to 2014. A two-time holder of Fulbright grants to Italy, he has written about artistic production, the function of liturgical images, and institutional patronage in early Renaissance Florence. He addressed these subjects in his book Monastic Art in Lorenzo Monaco’s Florence (published in 2006) and in his DVD lecture series, Leonardo da Vinci and the Italian High Renaissance, produced by the Great Courses Company in 2012. He then focused his scholarly attention on the subject of art for common viewers in late Medieval Florence between 1280 and 1430: his book on this material, Public Painting and Visual Culture in Early Republican Florence was published by Cambridge University Press in 2016. 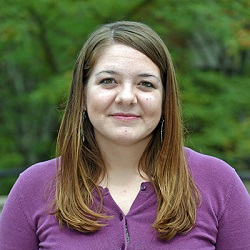 Mackenzie Brooks is Associate Professor and Digital Humanities Librarian at Washington & Lee University. Prior to her current position, she worked as Metadata Librarian at W&L and at the Loyola University Chicago Health Sciences Library. As chair of the Digital Humanities Action Team, she advises faculty and students on best practices for metadata standards in digital humanities projects. She is a core faculty member in the Digital Culture & Information minor. 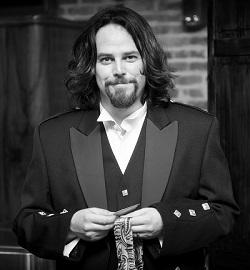 Erik Gustafson received his Ph.D. from the Institute of Fine Arts, New York University in 2012. Currently a Visiting Assistant Professor of Art History at Washington and Lee University, he has taught at George Mason University, Fordham University, and the University of California, Berkeley, and held a Rome Prize fellowship at the American Academy in Rome from 2007-2009. An architectural historian of medieval and renaissance Europe and the Mediterranean, Erik is broadly interested in the engagement of historical viewers with architectural space. He is particularly interested in the phenomenology of historical religious experience, and in how the constant dialogue between traditions of the past and the needs of the present produced architectural culture. Erik has forthcoming articles on Franciscan architecture as charismatic space and on a Crusader portal reused on a Mamluk madrasa in Cairo, and is completing a monograph entitled Building Franciscanism: Space, Tradition, and Devotion in Medieval Tuscany. 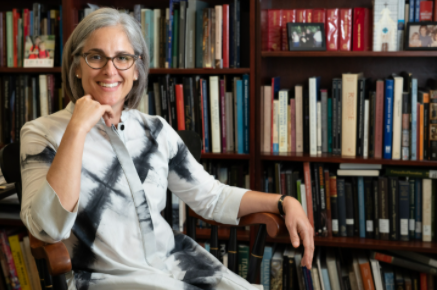 Anne Leader is Visiting Fellow at the University of Virginia’s Institute for Advanced Technology in the Humanities (IATH), where she is developing Digital Sepoltuario, an interactive website that chronicles the memorial landscape of medieval and Renaissance Florence. 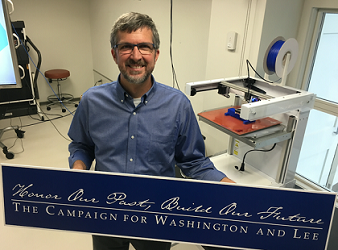 Dave Pfaff is the coordinator for Washington and Lee’s IQ center. He works to foster cross-disciplinary and quantitative approaches to inspire creativity and problem solving in teaching and research. Without his incredible knowledge and willingness to help our team, this project would not be possible.